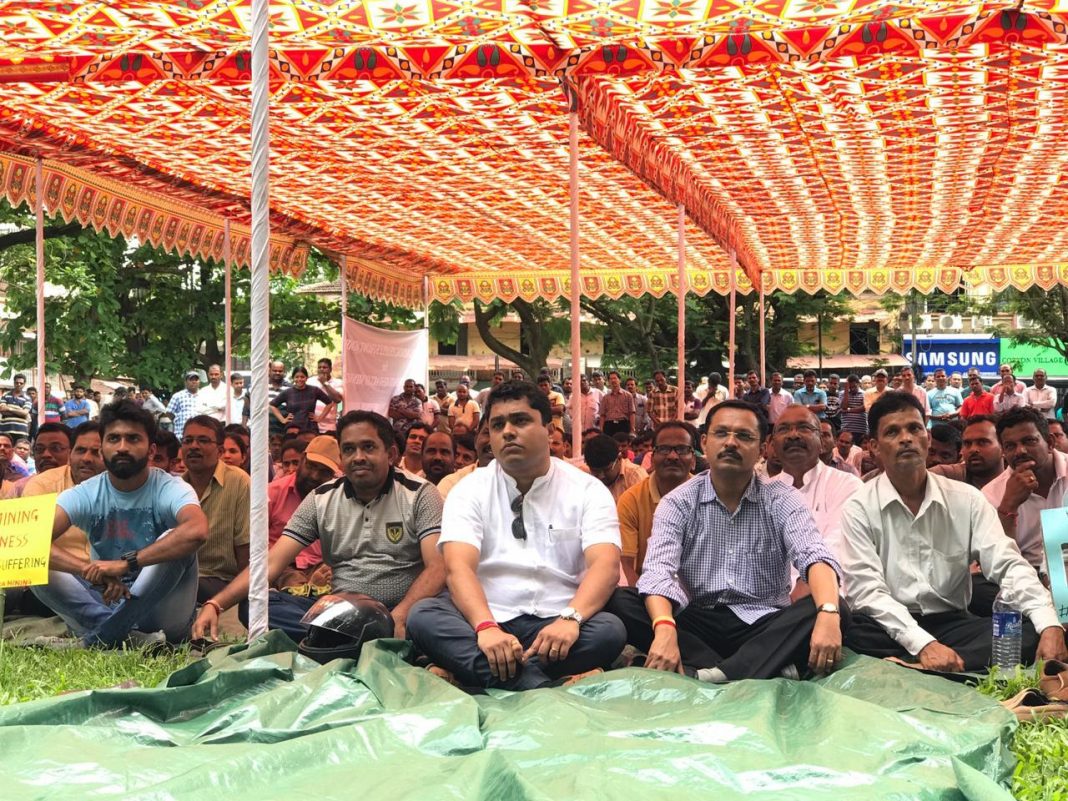 Panaji: The people dependent on mining industry on Friday got a major political support with the BJP’s ally Goa Forward Party (GFP) threatening to resort to ‘extreme steps’ and Shiv Sena assuring the backing in the Parliament for them in their fight for resumption of the industry.

Goa Mining People’s Front (GMPF) held one-day-long token hunger strike at Azad Maidan in Panaji demanding Central government to amend existing laws to give new lease of life to the industry which has come to a grinding halt since March, 2018.

“Resumption of mining industry has been a major concern for the people who are living in the rural areas of the State. Central government can move an amendment to the existing mining laws and resume the industry,” GFP Vice President Santosh Kumar Sawant said addressing a crowd of around 3,000 mining dependents this morning.

He said that his party has assured that they will be with the mining dependents till the industry resumes. “Though we are part of the State government, on behalf of the party, I assure you all that we will be forced to extreme steps if mining does not resume before Lok Sabha polls,” he said.

Sawant that all the three legislators from GFP would be the first one to walk out of the government, if time comes, in support of the thousands of people dependent on mining industry.

Party’s Vice President Durgadas Kamat said that the union government can move an Ordinance and amend the law, if they want. “We will put complete pressure on the government to do so as we are with the mining dependents,” he added.

“We have not come here to get votes from you. We are here because thousands of families are suffering due to ban on the mining industry. The need of the hour is not to sit for hunger strike but to strike and call for Goa bandh,” he said.

Raut stated that Sena would be willing to take lead in having Goa bandh in support of mining dependents.

He also assured that all the Sena MPs would be supporting any amendment for the mining laws that could provide solace to the industry in the State.

Goa Suraksha Manch leader and former RSS Goa chief Subhash Velingkar alleged that the mining was initially stopped in the year 2012 by Chief Minister Manohar Parrikar “to take revenge on few of the mine owners.”

“Since that time the mining industry has been in the doldrums. The so-called efforts shown by BJP leaders to speak to Prime Minister and other leaders to get industry back on the track are mere eye wash. I have personal experience of facing such eye wash from the BJP leaders,” said Velingkar.

He said that this is the time to send clear signal to BJP that people will not tolerate any such kind of gimmick.

The Supreme court through its order on February 7, 2018 had quashed operations of 88 mining leases questioning their renewal by the State government.

Previous articleGoa reduces VAT on petrol, diesel, prices to go down by Rs. 5
Next articleThere will be no mid-terms polls in Goa: Vijai Sardesai