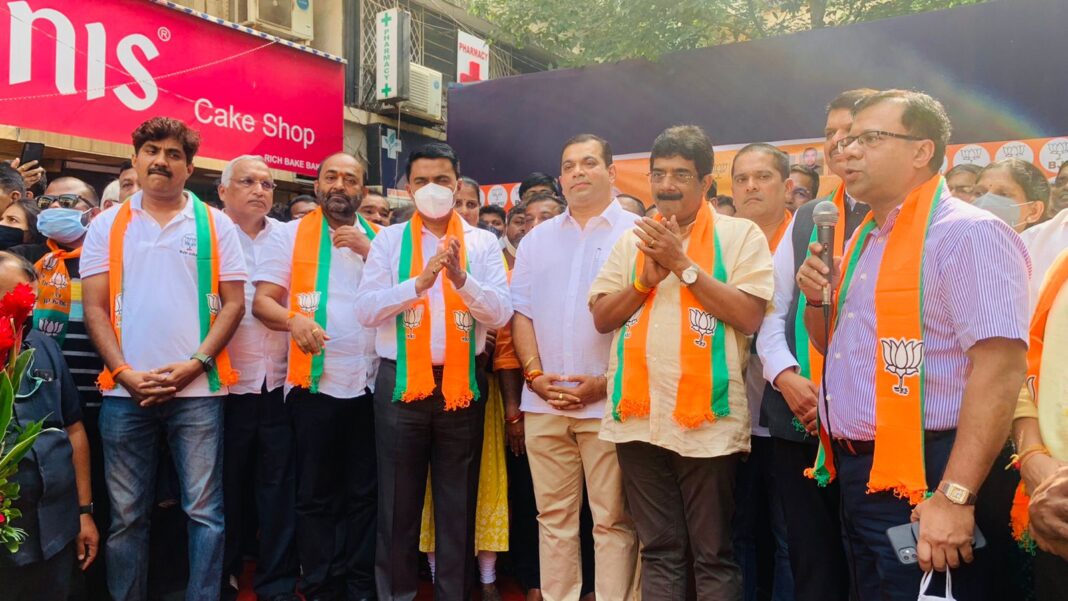 Panaji: Stating that political parties from Delhi and Kolkata have arrived in Goa to conduct their experiments, BJP’s Goa Desk election in charge Devendra Fadanavis on Friday called Congress as “part-time party” which is slowly vanishing from the country.
He also questioned TMC supremo Mamata Banerjee why the situation in West Bengal is bad if she claims that there is good administration in her state.
Fadanavis was addressing a crowd in Panaji after induction of ex-Porvorim MLA Rohan Khaunte in the party fold. Chief minister Pramod Sawant and State BJP President Sadanand Shet Tanavade were also present on the occasion.
“People here for experiment. They want to conduct experiment of their own (political) parties in Goa. But Goans are wise enough to understand all this. Goans know who will be with them and who will fly away after the election,” the former Maharashtra chief minister said.
Fadanavis said that the political parties from Delhi and Kolkata have come to Goa “only to create division and play their own politics.” “When they lose the election, they disappear for next five years only to return next time during the election. They don’t have any plan, program for development of Goa,” he added.
Fadanavis said that Congress is “slowly vanishing from the country.”
“Congress has remained as a part time party in the country.  The leaders of congress are part time, they don’t get into full time politics and hence their party has also turned into a part time party,” he commented.
Fadanavis said that Congress leaders are running the party for the sake of it. “They want to run the party on its past accomplishments but that has also got over. Even old leaders are no more with them,” he said.
Fadanavis said that TMC has started saying they are original Congress. “I want to question Mamata didi that if your administration is good than why is West Bengal going through bad situation,” he said.
He questioned why the investors are not coming to West Bengal and why the state tops the list in unemployment and crime rate.
“There is no democracy in West Bengal . If any of the opposition party leader raises the issue, in next four days, you will find his dead body hanging,” Fadanavis said.
He said that he is surprised that the Goan parties like MGP who knows politics and history of the state has joined hands with TMC.
Fadanavis termed AAP as the party which shows only trailer but not the movie.
“They go everywhere to show the trailer. You know that trailer of every film is always hit. But when you actually see the movie, you realise that whatever was in trailer is not there,” he said.