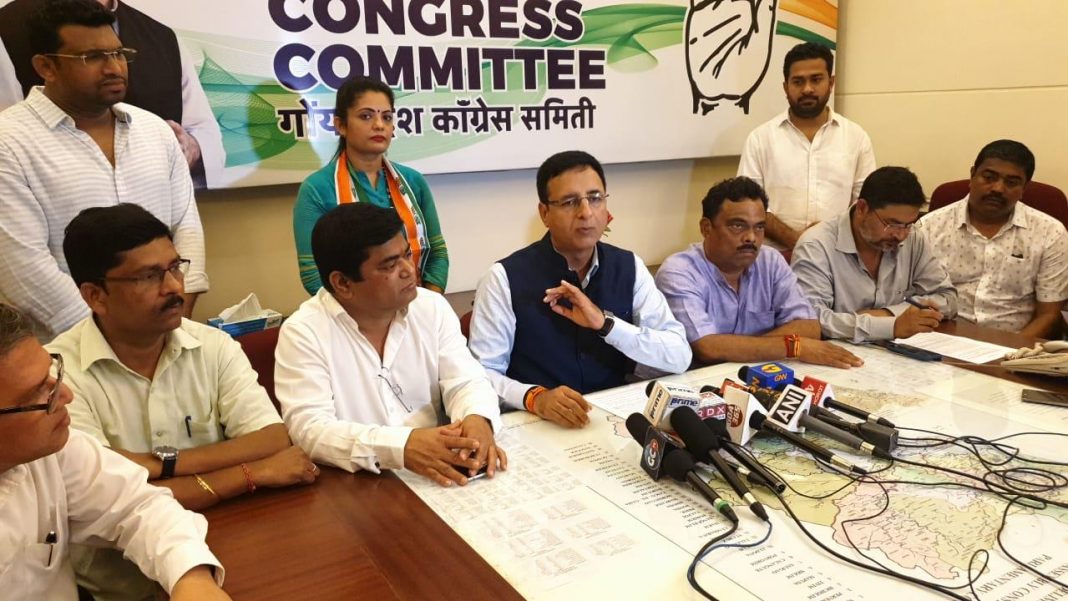 Panaji: Congress Party on Saturday said that it will put pressure on the Central BJP leadership and also on government in the Winter Session of the Parliament to summon day long Session of Goa Assembly asking ruling coalition to prove its majority on the floor of the House.

Congress party in the past has given representations to President of India and State Governor claiming that the majority number of MLAs are with them, and they can prove it provided opportunity is given on the floor of the House.

“Goa is a classic case of fraud being played on the people of Goa by Governor and the BJP at Centre,” Congress Spokesman Randip Singh Surjewala said talking to reporters in Panaji on Saturday.

“We will put pressure on Central BJP leadership and also in the Winter Session and before the President pressing for a special session to prove majority,” he said.

He said that a special session of Goa Assembly should be immediately convened asking BJP government to prove its majority and lay down a roadmap for Governance and Administration as also settlement of issues of Regional Plan, Mining, Coastal Regulation Zone, Unemployment and others.

“This will clear all doubts about who is in-charge in Goa and the floor-test will determine as to which party has the rightful claim to head a democratic Government in people’s interest in Goa,” he added.

The Congress spokesman was critical about the functioning of the government in physical absence of Chief Minister Manohar Parrikar, who is ailing.

The Congress spokesman said that the clamour for power characterizes complete breakdown of democracy in Goa.

“Paralysed governance, crippled administration and collapse of authority has become symbolical of the chaos prevailing in the BJP government in Goa,” he said.

“The corrupt, careless and conspiring BJP holds to power in Goa in illegal and unconstitutional way,” he said.

“The truth however is that sheer greed for power by BJP has plunged the state in the deep dingy abyss where after democracy, governmance has become the next casualty,” he said.

“On account of incapacity of cm owing to his illness, power brokers are running amuck plundering the state’s resources and holding democracy to ransom in Goa,” he commented.

Surjewala recalled that in an unprecedented and disturbing move, BJP which usurp power in Goa through backdoor, held a meeting of the ministers of cabinet in AIIMS at Delhi on October 12.

“This has never happened in the history of Goa.

This has never happened before in Goa. On october 31, 2018 official twitter handle of goa cm posted a pic of cabinet meeting,” he pointed out.

“The People of Goa were deeply disturbed by the visual in the picture. It reflect that Parrikar need emergent medical attention rather than the grand standing by being done bjp vis-à-vis his health for by clinging to power in some fashion,” he added.

“All this while the key contentious issues like the mining, regional plan, unemployment, formalin, CRZ, governance, taxi, Transfer of Developmental Rights are allowed to linger without being providing relief either to the affected people of Goa,” Surjewala said. “The mess created by the BJP by stoppage of mining, closure of businesses of small traders and mismanagement of sand mining has affected the entire state,” he claimed.

The Congress has questioned why isn’t a single health bulletin being issued on the medical condition of CM by the doctors.

“If CM is fine, as per the press statements, why is he refusing to meet even the Leader of Opposition and MLAs and interact with them,” he added.

Previous articleMGP threatens to fight against BJP in by-polls, LS election if Sudin is not given CMO charge
Next articleMining dependents should show full faith in Shiv Sena