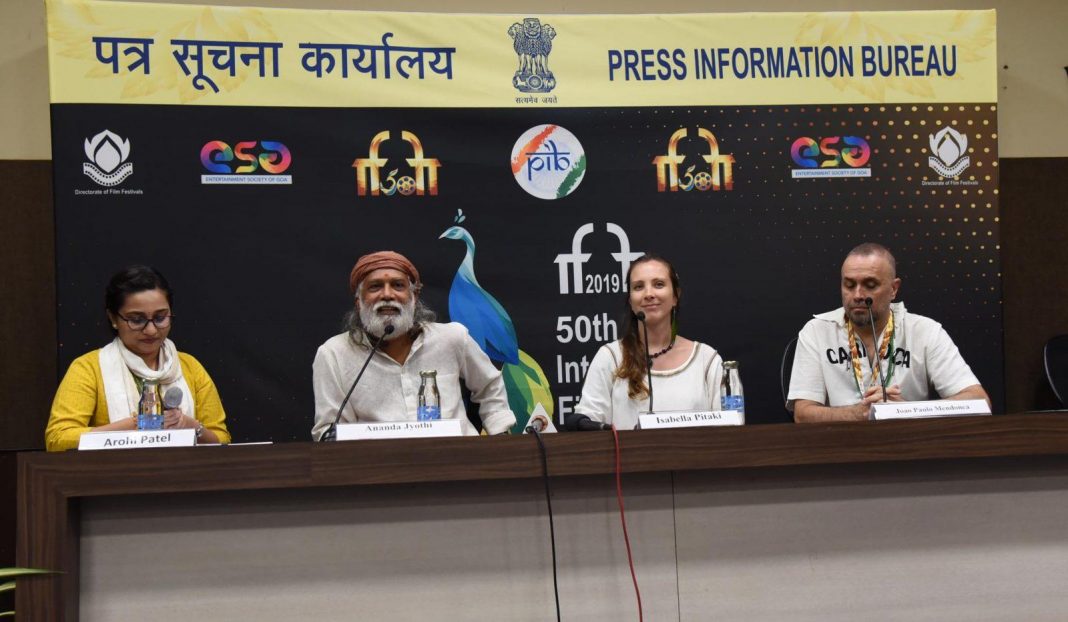 Brazil is often used synonymously  with football and samba dance in our country. But at IFFI venue on Monday, the country’s name resonated with spirituality, culture and films as an Indo-Brazilian audiovisual co-production ‘Uma – Light of Himalaya’ became the subject of heated discussion. Leading the discussion was Ananda Jyothi, the director of the movie along with Music Composer Joao Paulo Mendonca and actress Isabella Pinaki.

Speaking on his movie, Shri Ananda Jyothi said, “ My movie doesn’t have a fixed structure like beginning, middle or end. It is a visual pilgrimage”. River Ganga is the heroine of the movie and I see it in a cultural perspective. Ganga is the only river which is revered this way in the whole world, he added.

Shri Ananda further said that though India is an ancient country and Brazil comparatively new one, both countries have a lot to share. “Brazilians welcome Indian culture. Indian films are also very well received during film festivals in Brazil”, he added.

“The best thing about films in Brazil is that they don’t have a censor board. I think that is the best. That’s the worry all filmmakers have here. We need to loosen up a bit,” he added.

Music composer Joao while sharing his experience said, “This is my first time in India and the people I met are lovely. It is certainly going to change the way I create music. In this film I concentrated on the poetics –  Ganga has an amazing affect. I tried to play indian instruments but it would take a lifetime for me to learn.”

Describing his association with the film and its Director Ananda Jyothi, music composer  Joao said that India is a very spiritual country and spirituality brought them together.

Underlining her special love for India, Isabelle Pinaki said, “ “I am thankful for this nice experience. It was a very personal experience for me spiritually. I am surprised not only with Goa but  by the size of the festival too. It is amazing. People come to India seeking happiness.I have visited India a few times. I have a special love for Kerala. Now Goa is included in that list.” She added that the acceptance of Indian culture is a lot in Brazil because of Yoga and spirituality.

‘Uma – Light of Himalaya’ directed by Ananda Jyothi, portrays the search of every human being from the perspective from the sacred river Ganga itself, which represents the ancestral wisdom of India. Thousands of seekers, for thousands of years have walked and still continue to walk on this river’s edge illuminated with the flow of light. Uma tells a story about spiritual search of Brazilian young seekers, discovering the light and tranquillity through the depth of Indian wisdom. The film is the first Indo-Brazilian audiovisual co-production by Perumeen Cinema and Vedanta Life Institute, Rio de Janeiro.