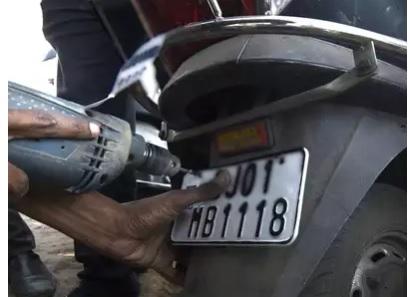 Panaji: Following hue and cry from public over chaos and confusion with regards to fitment of high security registration plates (HSRP) on vehicles, the Transport department has issued show cause notice to the contractor for miserably failing to provide the service.
Director Transport Rajan Satardekar has show caused contractor M/s Real Mazon India Ltd as to ” why action to the extent of invoking penalty clauses and forfeiting the performance security to the government should not be taken against your company”.
The company representative is been asked to remain present for personal hearing on November 5 failing which has warned to take ex-partner decision.
“It has been reported by the registering authorities that the vendor M/s Real Mazon India Ltd has failed miserably in providing services to the extent of fitment of HSRP to the vehicles registered in the State,” the notice reads.
It has said that the Leader of Opposition and Margao MLA Digamber Kamat in a written complaint has pointed out to the deficiencies in the services and lot of public outcry has also been reported through media.
“The justification for the deficiencies given by company officials are unacceptable,” notice said.
- Advertisement -