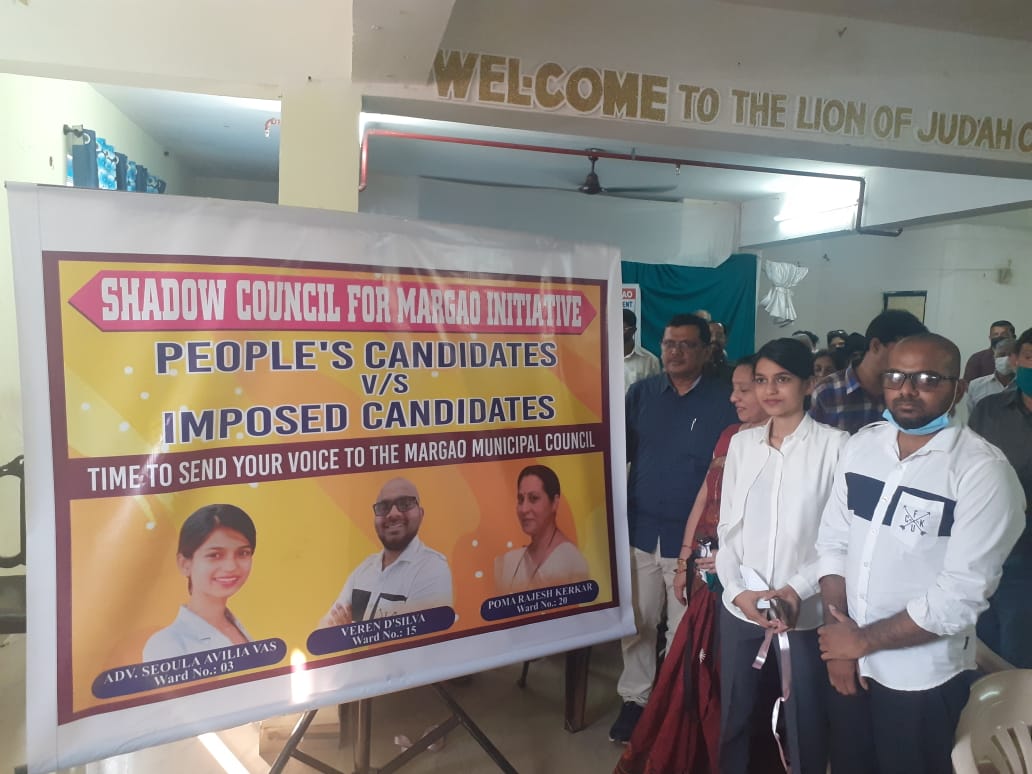 Panaji : Shadow Council for Margao(SCM) has announced 3 candidates for the MMC elections in the presence of a large crowd today.

SCM Convener Savio Coutinho informed that the reason for the initiative of fielding people’s candidates for the upcoming Municipal elections was solely on account of the miserable failure on the part of the outgoing Council in spite of the fact that the Magaonkars had given and overwhelming majority to the alliance formed in 2015. The genuine issues of Margao continued to remain on the back burner, but personal interests and scams were a galore Mr. Coutinho lamented.

“Prior to the elections everyone speaks about ruling and opposition sides, but once elected all are “rolling”, and this fact was well experienced by the Margao citizens during the last 5 years.” said Coutinho

In the first lot Adv. Seoula Vas was announced as the candidate from the unreserved ward no 3, while Eng. Veren D’silva and Smt. Poma Rajesh Kerkar will be candidates from ward no 15 and 20 respectively.

The 3 candidates spoke at the function and revealed their strong desire to work for the community and the city, and more specifically be a strong voice of the people.

Dr. Jorson Fernandes was the key speaker at the function and appealed to support and elect candidates who are committed to public welfare and most importantly with high level of integrity. Dr. Jorson also highlighted the importance of weeding out corruption which happens to be the root cause of all the city’s ills.

Coutinho revealed that they would field and support 12 to 15 candidates and work towards their victory.

Arjun Gawande welcomed the gathering, while several other people expressed their views and appreciated the initiative of encouraging people’s candidates.

Previous articleCentre and State must bring consensual reduction in taxes : Rohan Khaute
Next articleElections in Goa will not be preponed: CM