Panaji: Several hundred people on Wednesday gathered at Panaji’s historic Azad Maidan to condemn Citizenship Amendment Act, claiming that the lawmakers who supported it were anti-nationals.

“It’s sad that Prime Minister of the country is dividing the people on communal lines. PM is trying to point out to a particular religion, which is not fair,” he said.

“No one can stop a person from entering the country based on religion. All the MPs in Rajya Sabha and Lok Sabha who have voted in favour of the Citizenship Amendment Bill are culprits. They are anti-nationals,” he said. 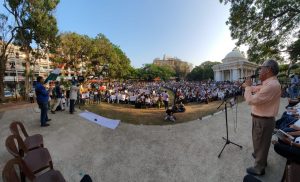 Bhatikar said that BJP came to power after Lok Sabha election 2019 due to failure of other parties to come together due to their own egos and selfish behaviour.

“It’s our bad luck that the opposition parties could no be together due to ego and selfishness. They could not agree on simple agenda of defeating BJP.

Congress had come to power on minority votes all along. But congress never tried to tinker the Indian constitution,” he said.

“All Goans are together in opposing this act which is aimed at tarnishing the secular fabric of the country,” he said.

Sheikh said that people belonging to all the religious faiths have contributed towards the independence of the country.