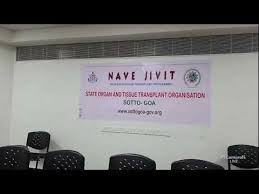 Panaji: A day after doctor’s of Goa Medical College (GMC) and hospital harvested organs from its first deceased donor, the government announced its the State’s deceased Donor transplant programme of Goa known as ‘Nave Jivit’. The aim of the programme is to maximize the organ utilization and minimize the organ wastage.
State Organ and Tissue Transplant Organisation (SOTTO) Goa and Goa Medical College created history after it harvested the organs of a deceased donor. The donor, a 21 years old boy from Chattisgarh was admitted to GMC on November 30 with severe head inquiries following a road traffic accident. After a clinical diagnosis of brain death was made and the relatives prognosticated  about the same, the stepped forward with a request for organ donation. SOTTO team counseled the relatives and with their permission initiated the process. The cascade being the ICU played vital role with guidance from Intensivist from Mumbai in maintaining the donor.
After the brain death certification was done, as per the waiting list currently which is only of GMC, the SOTTO team contacted the potential recipient for the workup. The  other organ were offered to the region and allocation was done of the Liver and Heart as per the waiting list.
Since there was no registered recipient for the lung in Goa, itt was offered to the rest of the country and NOTTO allocated the lung to the state of Telangana. Dr. Pravin Kulkarni lead the team from Sir H N reliance foundation Mumbai. Dr. Rahul Saxena lead the team from New Era hospital from Nagpur.
Dr. Prem Anand John and Dr. Unmil Shah  lead the team from KIMS from Secundrabad.
The heart was transplanted into 59 years old recipient from Mumbai. The lungs was transplanted to a 58 years old recipient who was on Ecmo and diagnosed with a Post COVID fibrosis.
The Liver have been successfully transplanted to 59 year old male admitted at Nagpur. All the three recipients are doing well. The kidney recipients at GMC are also doing well, press note stated.