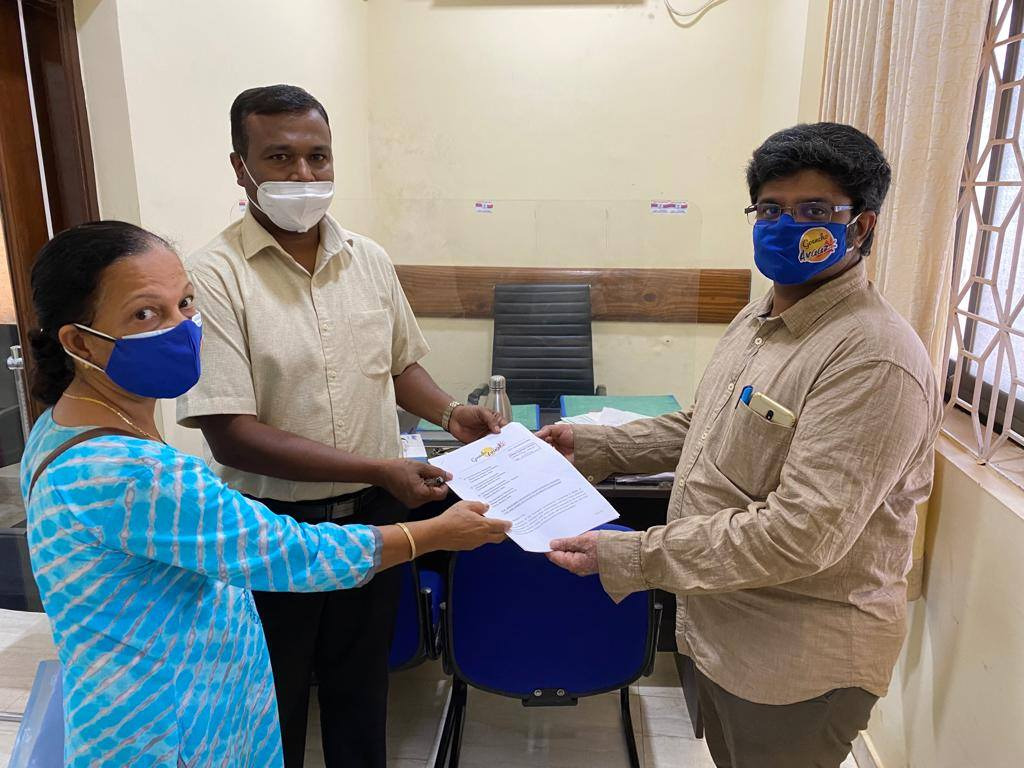 Roshan Mathias, the people’s candidate for Calangute constituency from Goencho Avaaz Party has succeeded in ensuring that the entire village of Candolim comes under CCTV surveillance. Just last month, Roshan led a delegation of people to submit a memorandum to the the Calangute, Anjuna and Mapusa police stations as well as Candolim, Calangute, Arpora, Nagoa and Parra panchayats to demand swift action on the law and order breakdown and huge crime spike that plagues the area. The memorandum was also given to Chief Minister’s office and Director General of Police. The group comprising of locals from the villages of Candolim-Sinquerim, Calangute-Baga, Arpora-Nagoa and Parra, urged the authorities to restore safety to the people and to ensure that law and order prevails. One of the requests in the memorandum was to install CCTV cameras in conjunction with the panchayats on main roads, identified hot spots and by-lanes. Agreeing to the request, recently Candolim panchayat made an announcement that they will place CCTV cameras all across the panchayat area to help police detect criminal activities.
As a follow-up to the memorandum, Calangute panchayat promised to repair the existing CCTVs, which still hasn’t been done. The Parra panchayat expressed their desire to do right by the people and said that they have placed an order for CCTVs.
Commenting on the successful initiative, Mathias said: ‘I endeavour to make Calangute constituency shine again, which entails creating a safe haven for residents. Under the ruling BJP government, the Northern tourist belt has deteriorated rapidly and to such an extent, that there is a complete breakdown in law and order. Hence, my first course of action was to convince the local police stations and panchayats that it was time to prioritize the safety of residents. We submitted a memorandum that comprised a list of demands, one of which was a call to action to install CCTV cameras all over. I am pleased that the panchayat took cognizance of the issue, whilst trying to restore law and order and reduce the crime rate. We urge the Calangute, Parra and Arpora-Nagoa panchayats to also take a page from the Candolim panchayat and install CCTVs in their respective villages.’’
As part of the memorandum, Team Goencho Avaaz Calangute constituency made the following demands:
That, 24 x 7, uncompromised, strict, daily patrol of police at all main junctions which would include random checks of passers-by into the area, particularly between 8 pm to 8 am. This would help to understand their identity and purpose of being in the locality. It would also narrow down the search in case of any untoward incident that might occur.

These checks should include personal identification verification and search for arms & ammunition.Appropriate action as prescribed bylaw should be enforced strictly without bias or nepotism.

That, Police booths be setup in every village, where people can immediately rush to in the event of an emergency. The police should be assigned to such booths so that they will reach troubled spots on a matter of priority. At least one woman police person is available at all times at such booths.

The police should be aware of “the who and who’s” that are currently residing on any given date and time within their respective jurisdiction.

An adequatestaffing of police personnelto meet the requirements of the constituency including women personnel for women-related crimes and issues.

In conjunction with the Panchayats, CCTV cameras are set up on main roads, identified hot spots and by-lanes