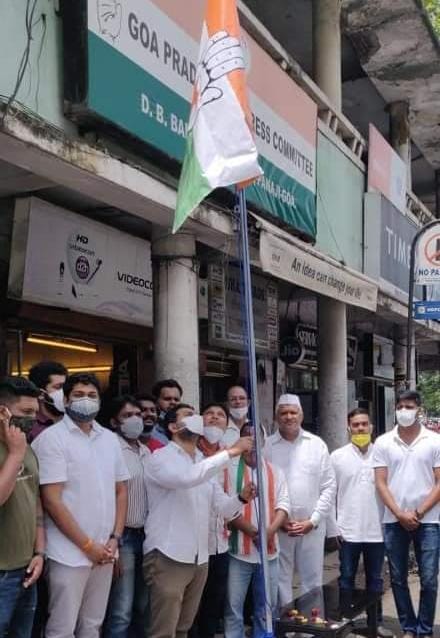 Panaji : The Goa Pradesh Youth Congress on Monday commemorated the 61st Foundation Day of Indian Youth Congress by unfurling the Flag at Indian National Congress – Goa Headquarters, Panjim.
Goa Pradesh Youth Congress President Adv. Varad Mardolkar unfurled the flag and addressed the Youth.
Goa Congress Seva Dal Chief Organiser Shankar Kiralapalkar,
Archit Naik, Glean Cabral, Himanshu Tivrekar, Saish Aroskar, Vivek D’ Silva, Gautam Bhagat, Leiven Silveira, Dennis D’Souza, Joel Andrade, Prashant Solyekar, Roshan Chodankar, Akshay Kamble, Anil Rathod, Jayendra Shirodkar, Peter Fernandes and others were present on the occasion.
Speaking on the occasion Mardolkar said that  the youths are the future of the nation and hence they should take up the issues pertaining to the state and Goa and work toward keeping watch on unwanted works of government. “Now a days, the government imposes projects and bills against the wishes of the public. Hence such issues should be highlighted by youths and fight to give justice to people,” Mardolkar stated.
Adv. Mardolkar further said that  the Youth Congress Members said that this is the biggest platform for youths to take up the issues. “We, youths, should be vigilant enough to oppose the unwanted policies of the government, so they don’t harm people,” Mardolkar said.
Citing an example of Bhumiputra bill, which has turned controversial after many people took objection to the word Bhumiputra, Adv. Mardolkar said that th BJP government is trying to bulldoze the wishes of the public and trying to put the public in problems.
“We have understood and brought it to the notice of the public, that having a majority in the assembly, BJP can’t go against wishes of the public and kill democracy,” Mardolkar said.
Adv. Mardolkar said that as elections are near, BJP will try to manipulate things and divide people in order to garner votes. “Hence we will have to convince people that they don’t fall prey to the political techniques of BJP,” he concluded.
- Advertisement -