Goa CM presents budgets with no extra taxes, GDP growth at 7.07 per cent 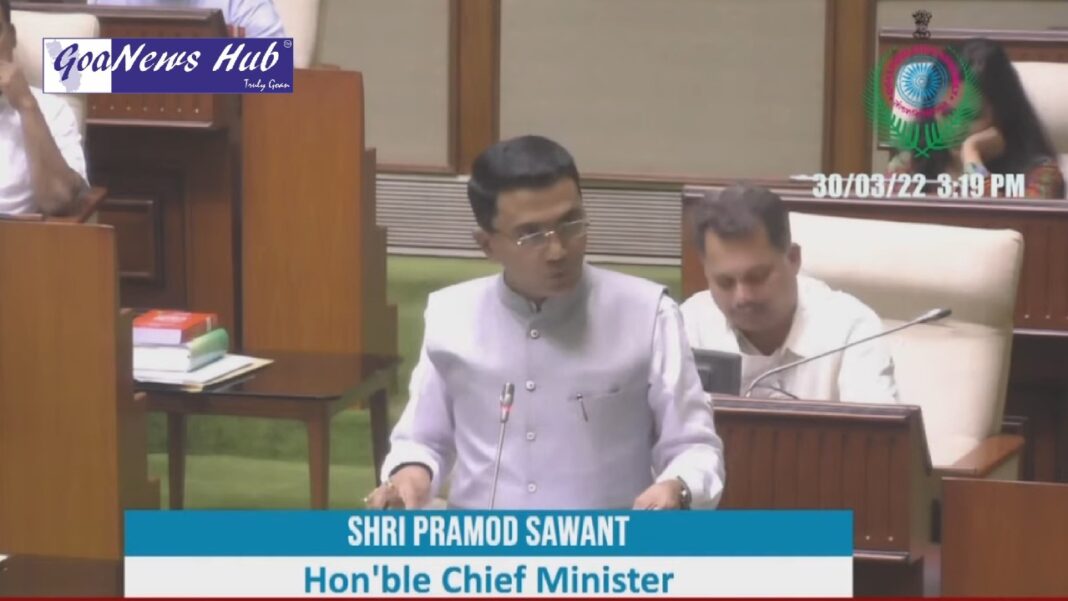 Panaji: Goa chief minister Pramod Sawant on Wednesday presented the State Budget of Rs 24,467.40 Cr with no additional taxes levied for the upcoming fiscal, while harping on plugging of Revenue leakages.
Sawant said that his government stresses for plugging of revenue leakages rather than imposing additional tax burden on the citizens. The Budget was presented in English and Konkani by the chief minister, who was sworn-in on Monday after his party won on majority seat during recently held Assembly election.
In his Budget speech, Sawant said that  Gross State Domestic Product  at current prices for the year 2022-23 was estimated at Rs 91,416.98 crore indicating a growth rate of 7.07 per cent.
The overall size of the Budget is Rs 24,467.40 crores with the growth rate for Gross Value Added (GVA) is estimated at 4.73 per cent for primary sector, 6.52 per cent for the secondary sector and 9.66 per cent for the tertiary sector.
Goa’s per capita income at current prices continues to be front runner in the country at Rs. 5.80 lakh, he said.
The Budget has increased outlay for several departments while it has also announced introduction of Voluntary Retirement Scheme for the government servants, the details of which would be made public during the later stage.
“There is a need to make Government Administration more swift using technology. After one age, it becomes difficult to adapt to the technological changes,” he said announcing the VRS scheme for the government servants.
The Budget has given stress on the Health Sector in the State. The allocation for the Health Department has been increased to Rs 1970.20 crore which is 12.86 per cent above the allocation given in the previous fiscal.
Sawant has allocated Rs 173 crore for the strengthening of the infrastructure of State’s premier hospital, Goa Medical College and Hospital.
The chief minister also proposed to earmark Rs 20.12 crore for the scheme titled “Covid-19 Relief To Marginalized/Unorganized Sector” which provides a one time financial relief for COVID affected livelihoods.
To settle pendency under “Ex Gratia Financial Assistance to the family of the victims of Covid-19” which provides one time ex-gratia of Rs. 2 lakhs to family of the deceased victim, Rs. 20 crores has been provisioned.
After state faced major floods during the last monsoon, Sawant has proposed Rs 100 crore worth ‘Flood Mitigation Project’ to implement flood control measures in the areas badly affected on Mahadayi, Chapora, Mapusa and Khandepar Rivers.
With regards to the Casinos, Sawant has said that his government intends to notify new rules for casino operations in the state under the Goa, Daman & Diu Public Gambling Act, 1976 which will streamline and regulate the operations of Casinos in the State.
The Budget has also proposed provision of Rs five crores for  promoting international chartered flights in the state by bearing a part of parking and landing fees at Dabolim International Airport.

Previous articleGTA and GCCI did a Joint representation to Director of Information Technology.
Next articleSawant presents ‘Time Pass’ copy-paste and oft-repeated budget: Congress