Thivim:  The first Shramik Express train from Goa left for Gwalior (MP) on Friday morning with around 1,200 migrants on it from Thivim railway station.

“The train left from Thivim Railway station around 11 a.m. with around 1,200 migrant labourers on it,”said  Kunal, an officer incharge of inter-state migrant cell.

The train will reach Gwalior on Saturday morning, he said.

Kunal said that they have coordinated with MP government so that the forward transportation of these labourers for their native place could be fecilitated.

Goa government’s agencies including both the district Collectors, Police department, Health Department and Konkan Railway Corporation Limited have coordinated for this process, he said.

The labourers who were scattered across the state were first kept at two stadiums one each in North and South Goa before they were brought to Thivim Railway station by buses run by Kadamba Transport Corporation limited. 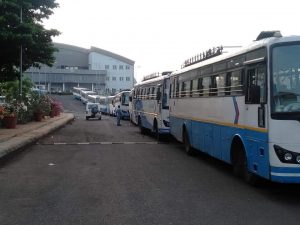 This is the first Shramik Express train that is run by Goa.

Goa had detected seven COVID-19 positive cases, all of which have recovered and discharged.