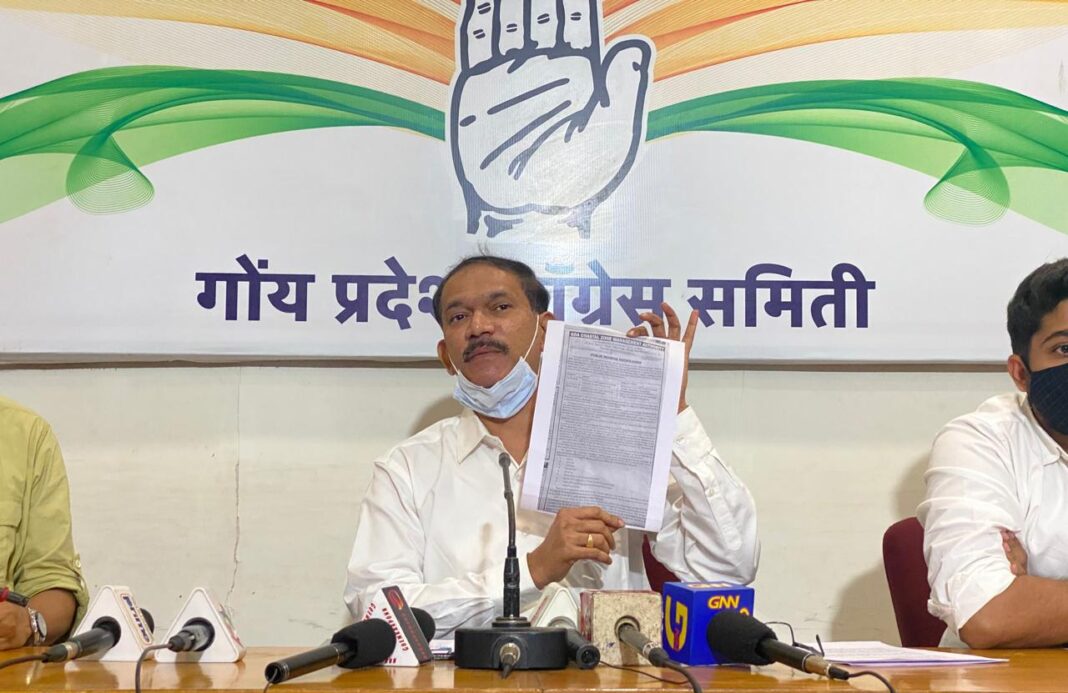 Panaji – BJP Government is all out to sell Goa to the Crony Club of Prime Minister Narendra Modi in the remaining seven months and hence wants to supress the voice of the people who are trying to protect the identity of Goa by holding the public hearings on CZMP under the ambit of Curfew and NSA and once again pushing the Goans in the death trap of Covid charged Congress President Girish Chodankar.
He addressed  a Press Conference at Congress House in the presence of Congress Spokesperson Arch. Tulio De Souza and Youth Congress Secretary Adv. Archit Naik.

I condemn the Chief Minister Dr. Pramod P Sawant for being a mute spectator to growing demand of the citizens  to postpone the public hearings of Coastal Zone Management plan (CZMP) which is scheduled on 8th July 2021 at an open venue Girish Chodankar said.

We are just four days away and there are no signs from the government to ensure that Participation and Freedom of Speech is protected of all the participants in the said hearings.

CM Sawant has today once again proved to be clueless having no control whatsoever on his Ministers nor his departments nor interested in protect lives even after 3000 plus deaths. Because of his failure to control Covid-19 deaths cases, Goa has recorded highest  positivity rate and death rate in India too which has even surpassed China. To control the covid cases  the Collector of  North and South had issued curfew orders no.8/8/2021/MAG/L&O/Vol-II/1277 and order no. 37/19/2020/L & O/MAG/6210 and has now extended the curfew till 12th July 2021 which clearly states that anyone violating the order will be booked under Code of Criminal procedure Girish Chodankar pointed.

The scheduled public hearing  has violated all procedures with restrictions imposed on each speaker to speak only for 15  minutes l. This government which thinks that it is above  law has dishonoured the directions given by the NGT which the NGO’s had approached due to gross violations in the public hearings process which were earlier held on the 7th March 2021. By invoking National Security Act, BJP Government wants to have public hearings at gun point creating fear among the public. Congress Party will not allow high handedness of BJP Government at any cost Chodankar warned.

It is now evident that the government is in a hurry to complete the CZMP without following the procedures and by bypassing the people’s genuine concerns. Governments  sole intention is to implement the new CRZ Notification 2019 which will reduce NDZ to 50 meters so that 105 Kms of coastline is sold to Crony Friends Adani and Jindal through Sagarmala project.

Congress Party will be with the people and we will ensure that government is forced to postpone the hearings and hold them again allowing all the concerned citizens to express their views democratically.

Previous articleWild boar to be declared as Vermin : CM
Next articleNaval Coastal Battery to carry out practice firing at Mormugao on July 9