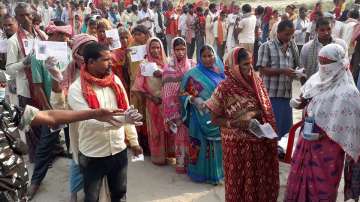 Panaji: Chief Minister Pramod Sawant on Saturday appealed voters to come out in large number and exercise their right during third phase of Bihar election. 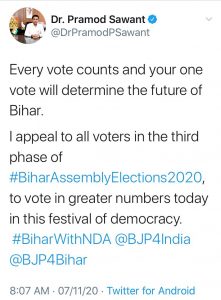 Sawant took on to twitter on Saturday to appeal voters to participate in the “festival of democracy.”

The chief minister tweeted “Every voter counts and your one vote will determine the future of Bihar. I appeal to all voters in the third phase of #BiharAssemblyElections2020 to vote in greater numbers today in this festival of democracy”

The third and final phase of election in Bihar went underway on Saturday. The polling would be held for 78 assembly segments in which 2.35 crore voters are eligible to decide the fate of 1,204 candidates.