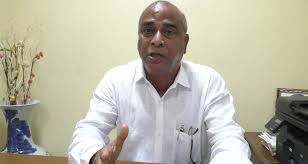 Ajgaonkar has earned criticism, for his Dubai trip to participate in the travel mart, from State’s Apex Tour body – Travel and Tourism Association of Goa, which has said that the participation in the marts is not showing the results in the form of footfalls for Goa.

President of the Travel and Tourism Association of Goa (TTAG) Savio Messias earlier this week had termed the Dubai junket as waste of the public money.

“What government officials in such delegations do is give their visiting cards to the travel agents and come back to Goa, and then get transferred to other departments, so that the follow-up process ends there itself,” he had said.

Reacting sharply to the criticism, Ajgaonkar on Wednesday said “I urge tourism stakeholders to refrain from criticism and work hard to bring discipline in tourism business in Goa and make Goa a tourist friendly destination.”

Opposition Congress party too had reacted to his Dubai trip claiming that he had gone there with his family members at the cost of State exchequer.

Goa Pradesh Congress Committee President Girish Chodankar, during a press conference, had said that Ajgaonkar was involved in wasteful expenditure.

“Congress has a tradition of taking their kith and kin on foreign tours at the cost of government money and that may be the reason why Congress President Girish Chodankar must have felt that others do the same and hence has made baseless allegations against me,” Ajgaonkar said.

“I have tried my best to give a boost to development of basis infrastructure needed at various tourist locations in Goa through Swadesh Darshan Scheme of Modi Government with a budget of Rs  200 crores. Most of the tourist locations are being beautified with parking, illumination, toilets, changing rooms etc,” he said.

The minister said that the work of Toursim Master Plan and Tourism Policy is in final stage and will be notified soon.

“I am working hard for making Goa worlds number one tourist deatination and My vision is to promote Goa with its Goemkarpon (Goan) identity,” he said.

“All my official foreign tours are undertaken only after obtaining prior approvals and permissions from all concerned authorities. I always insist on maintaining total transparency in my departments,” he added.

“My family members have taken care of their tour expenditure individually and government has not spent anything on their expenses. Those who seek any clarifications can file RTI and get all information,” he said.