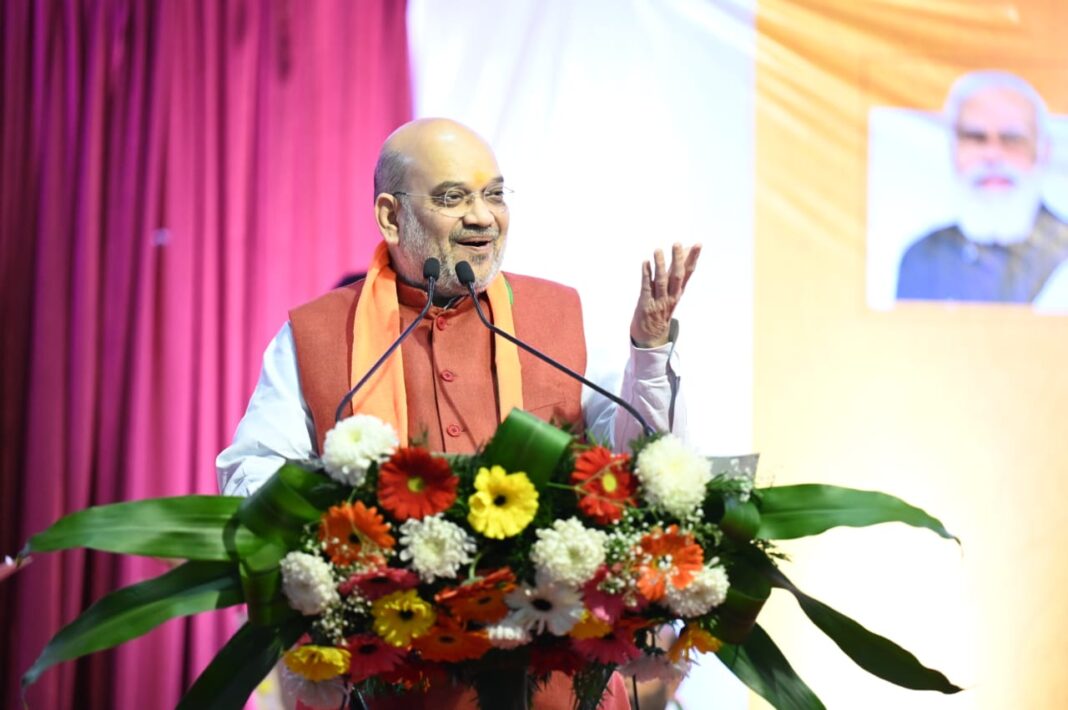 Panaji: Union Home Minister Amit Shah on Sunday demanded votes for his party pointing out to the infrastructure development and also increase in the central funding to the state during Modi-led government.

Addressing a public meeting at Ponda Assembly constituency in South Goa, Shah said that if Congress manages to be in power in Goa, the infrastructure development will come to halt as (their chief minister) Digambar Kamat had miserably failed to bring in infrastructure development in the state during his tenure (2007-2012) despite having his own party’s governemnt at the centre.

“Will Digambar Kamat be able to send the proposals? Even if he sends the proposals, will Rahul Gandhi allow him to send?,” Shah questioned adding that “Gandhi will never allow as he knows that popularity of Modi will be increased.”

Shah accused Gandhi of being afraid of Modi’s rising popularity in the country claiming that Rahul Gandhi suffers from Modi-phobia.

The BJP leader said that it is only Pramod Sawant, as the chief minister, who will keep on sending the proposals and getting more infrastructure to the State.

Shah pointed out that in the year 2013-14, when UPA government was in the centre, Goa had received Rs 432 crore as central funding, which was increased to whopping Rs 2568 crore during the last budget by Modi-led government.

He said that Modi governemnt has given priority to the small states as a matter of its policy because the centre understands that when the state is small, the requirement of development is more.

Shah said that the small size states have their own limitations of generating revenue, which cannot be overcome despite bringing any kind of transparancy.

“You may bring transparancy but from where the revenue will come? Can you build infrastructure projects, if central government do not provide you the support?,” he questioned.

Referring to the parties like TMC, AAP, NCP and Congress, Shah said that the smaller political groups, or the parties which arrive here from other states will not be able to do the development. “Do they know your difficulties? Do they have solution for them?,” he questioned.

Shah took a dig at freebies saying that these parties promise anything and everything as they know that they wont be getting elected so they wont have to fulfil them.

The Union minister said that Digambar Kamat-led government had “devasted” the state of Goa with its instability and misrule. Shah said that the BJP’s ten year long stable government has provided the development to the state.

He said that for BJP, Goa means ‘Golden Goa’ and for Congress, it is “Gandhi Parivar ka Goa.” “Gandhi family has a habit of going on holidays so they want a tourism spot for vacation. Do you want Golden Goa or Parivar ka Goa,” he questioned the audience.

In his speech, Shah hailed chief minister Pramod Sawant claiming that he has successfully handled affairs of the state after the demise of Manohar Parrikar.

He said that BJP under the leadership of Prime Minister Narendra Modi and chief minister Pramod Sawant, which can give development to Goa, create employment opportunities and also encouarge the tourism industry.

After listing out various infrastructural projects undertaken by BJP government, Shah dared Digambar Kamat (Congress) to present his list of infrastructure taken up during his tenure.