Panaji: The Village Panchayat of Cumbharjua finally demolished an illegal scrapyard operating in its jurisdiction at Gandaulim on Monday.

The action comes following complaints from Revolutionary Goan members against this illegal scrapyard being operated by migrants.

The Revolutionary Goans President, Viresh Borkar pointed out that this scrapyard has been causing air pollution in the panchayat area by burning hazardous waste, plastic and wires. 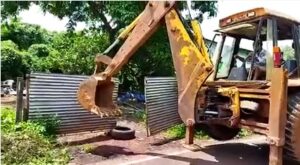 “Currently this scrapyard which has been demolished was earlier operating in Old Goa jurisdiction. Three years back they moved to Cumbharjua. According to locals, hazardous waste was burnt by scrap-yards at night or late in the evening. Following complaints from Revolutionary Goan members an inspection was carried out ten months ago of this illegal scrapyard being operated by migrants,” said Viresh.

“It was hazardous to the health of the locals as stench spreads in residential areas making it difficult for the people to breathe,” he added. 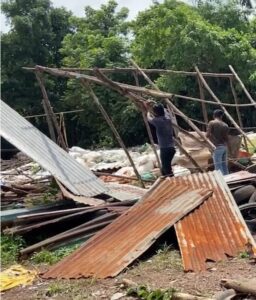 The complainant and RG Member, Rohan Kalangutkar claimed that he was not informed by the concerned authorities about this inspection.

“Sadly the authorities did not inform me about the demolition despite me being the complainant. However we are happy that action has been taken ten months later and this illegal scrapyard has been demolished,” said Rohan. 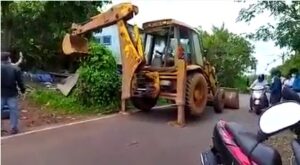 The scrapyard operators had stored various scrap materials including discarded tyres on a large scale.

The Sarpanch, panch, BDO, Mamlatdar, PWD and Electricity Department representatives and RG members were present during the demolition operation.