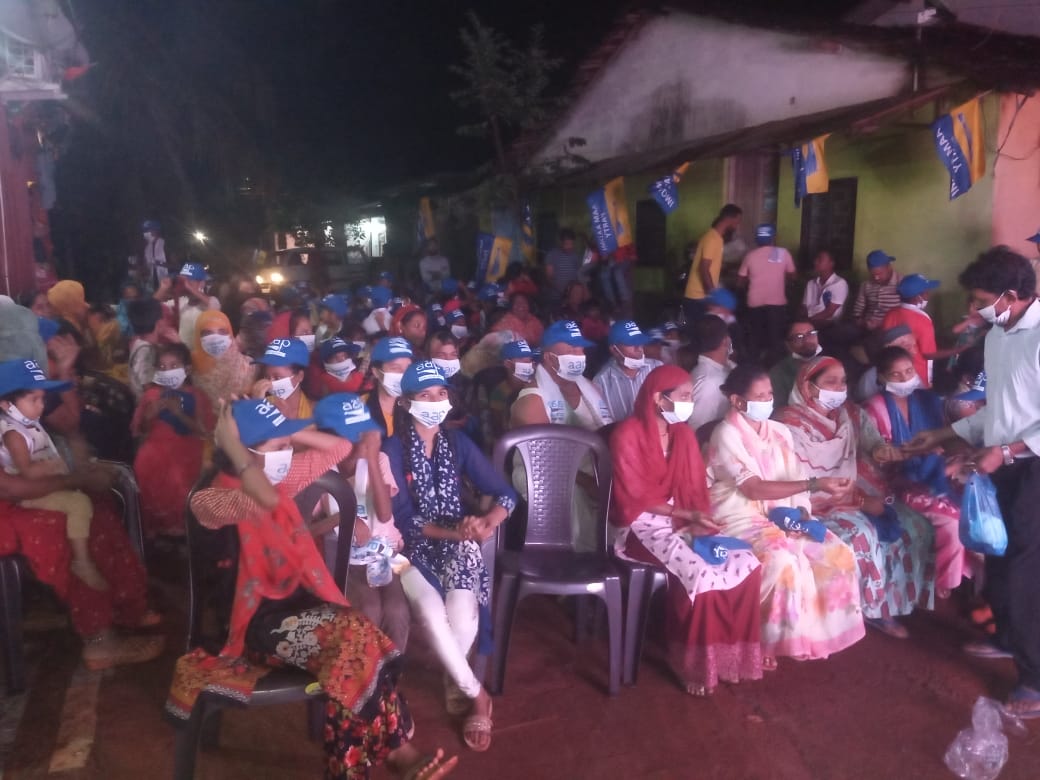 While addressing the gathering in Cuncolim, Prashant Naik, AAP’s Cuncolim assembly incharge said, “Cuncolim has played a major role in Goa Liberation movement. Cuncolkars have always been at forefront in all revolutions including Goa Liberation and keeping Goa’s separate identity during the merger issue. Let’s start from Cuncolim to bring the Aam Aadmi Party to power by taking revolutionary decision”.

Goenkars are already impressed by the Kejriwal model of electricity, school and healthcare amongst other things. Many youth in Cuncolim showed interest to Rs 3000 support that AAP has promised to the family of unemployed youth. Another concept that has fired up residents is the setting up of the Skill University as this would allow Goenkars to compete better for jobs and increase their employability. We have received huge response for the AAP’s rojgar yatra and AAP Chief Arvind Kejriwal’s free electricity guarantee”.

AAP leader Pundalik Dhargalkar said, “Pernem is like the head of the State and therefore it is important to save the culture and people of Pernem. In Pernem, the government has been introducing several developmental projects, although the residents of Pernem have received no benefits from these projects”.

“In Pernem, unemployment is a crucial issue. After introducing Mopa airport project, the government announced 5000 jobs for Pernem youth. The airport is expected to open soon, yet there is no apparent job creation in Pernem. Pernem need a change and the AAP is the only party which delivers the promises that is made”, he added.

“From jobs to medical services, everything happens under the influence of MLAs. BJP and Congress have been working for self-development. There is a dire need for corruption-free governance and only AAP can provide that. Our vision is to make smart villages. We will work to preserve our village waterbodies and culture. Many youngsters are leaving Goa for good career options and we will make sure that they get everything here so that they don’t have to leave their native place,” said AAP leader Cruz Silva in Velim.

While addressing the gathering in Thivim AAP leader Rasesh Bondre said, “There is a high rate of unemployment in the Constituency, as well as a lack of transparency in the allocation of government jobs. All of these factors have led to a great deal of frustration.
Thivim’s taxi owners have found it difficult to manage, due to loss of business during Covid. Making matters worse was caring for the infected, which exacerbated their financial situation even further”.

Sandesh Telekar Desai, AAP vice president said, “The people have been saying that they don’t want the BJP and the Congress parties anymore. They haven’t done anything for the people and only worked for their and their supporters’ self-development. After looking at all these years, the villagers are really looking forward to the AAP’s guarantees.”

He said “People have been reading about the transformation that Delhites have been experiencing. They are really impressed by the work that is done by the Kejriwal government. They have decided to choose AAP, because AAP has promised basic amenities.”

Previous articleFive persons suspected to be infected with Omicron isolated in Goa
Next article35 New infections, none died due to covid-19 in Goa on Monday