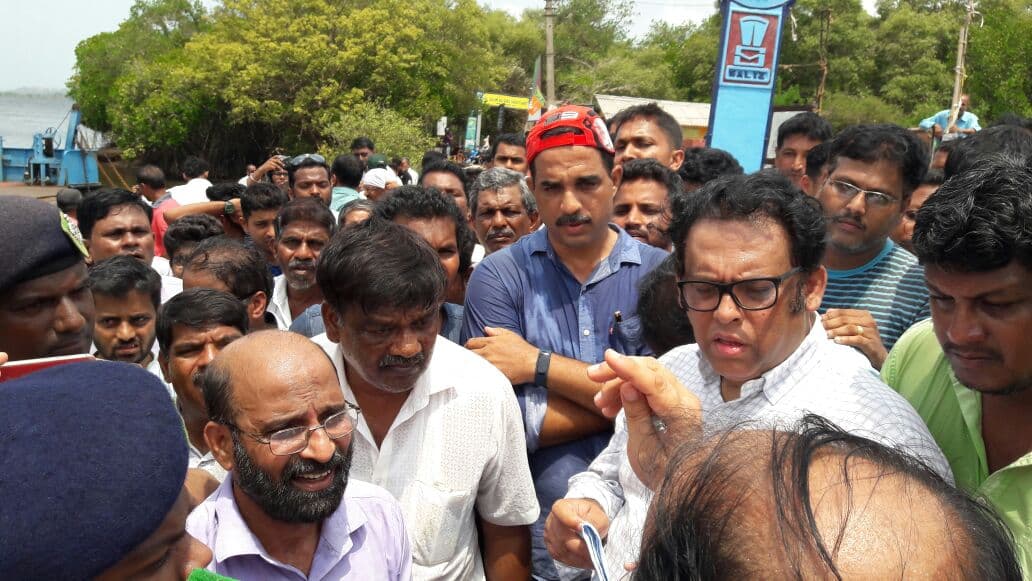 Chorao:  River Navigation Minister Sudin Dhavalikar and Mayem MLA Pravin Zanyte were severely criticized by the people from Chorao island for the inefficient ferry service putting the locals to hardship.

United Citizen of Chorao, a citizen driven initiative had held a bandh of ferry at Chorao today between 8 am to 10 am during which people expressed their anguish over Dhavalikar and moreover on local BJP MLA Zantye.

Though Zantye was present at the scene, he could not answer the tough questions put up by the people.

The agitators demanded the resumption of fifth ferry boat which was withdrawn from the route few days back adding to the wounds of the commuters.

Chorao-Ribander is an important link to the capital city of Panaji.

Zantye had to face the brunt of people’s ire.

Talking to reporters,  social worker Santosh Kumar Sawant from Mayem today made serious charges against Dhavalikar and Zantye over their  failed assurance regarding the fifth Ferry Boat to ply citizens from Ribandar to Chorao.

Sawant said citizens of Mayem constituency are suffering due to the lethargic and sleep mode behaviour of the local MLA.

Few days local MLA along with panch members had visited River Navigation Minister Sudin Dhavalikar who had assured about the 5th Ferry Boat.

“It’s clear now that Sudin Dhavalikar is also fooling the Citizens of Mayem probably may be busy with PWD portfolio,” said Sawant.

Sawant further said that he would soon take a delegation regarding the ferry services to TCP Minister Vijai Sardesai.

Panaji: Ponda MLA Ravi Naik has kept the political pundits guessing after he claimed that he might contest from Shiroda or even Madkai for...
Read more
News

Integrity of doctors should be preserved; stop violence against them

We are living a peaceful life and the credit goes to our soldiers, who perform their duty far away from everyone's eyes. We hardly...
Read more
Covid -19