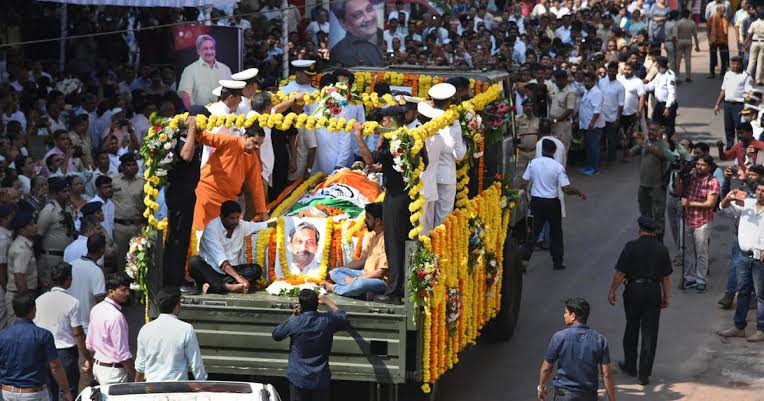 Panaji: The year marked the end of the Manohar Parrikar-era in Goan politics, with the IIT graduate-
turned-politician losing battle against cancer.
It also saw the BJP consolidating its position in the state Assembly, absorbing two-thirds of the state Congress legislature party and ending reliance on allies.
Parrikar, battling what was officially described only as a “pancreatic ailment” for almost a year, mustered enough strength to present the state budget in the Assembly. He died on March 17, 2019.
Pramod Sawant, then Speaker of the Assembly and a Parrikar confidante, became his successor.
To start with, his government depended on allies for majority in the 40-member House. The BJP won three out of four Assembly bypolls in April, and retained the North Goa Lok Sabha seat.
Two MLAs of ally Maharashtrawadi Gomantak Party (MGP) joined the BJP. In July, Sawant pulled off a coup when 10 of the 15 Congress MLAs crossed over, boosting the BJP’s tally to
27. The Congress, which had emerged as the single largest party in the 2017 state elections, was reduced to five MLAs.
Sawant, after having a comfortable majority, dropped three MLAs of ally Goa Forward Party and the sole remaining MGP MLA Sudin Dhawalikar from the cabinet.
On the economic front, closure of the iron ore mining industry due to a Supreme Court order continued to hurt the state. According to the state government, it is losing Rs 1,400 crore in revenue annually on this count.
The state filed a review petition before the Supreme Court in November.
The picture in the tourism sector, another major
source of revenue, is also not very promising.
The collapse of UK-based travel firm Thomas Cook resulted in cancellation of several chartered flights to the coastal state.
Industry sources estimate that there would be a drop of up to 30 per cent in the international tourist arrival during the current season.