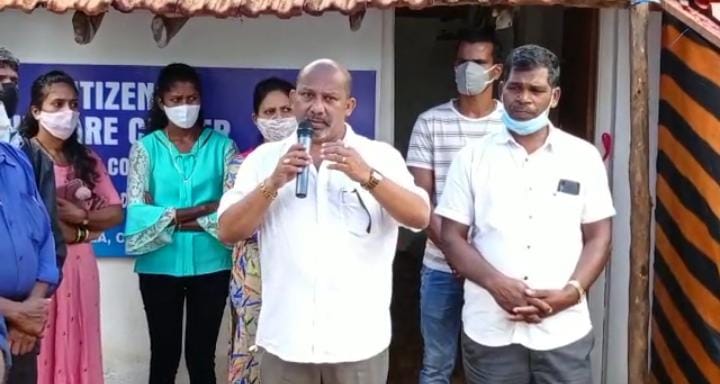 Quepem: Social worker Altone D’Costa on Sunday made it clear that he would be contesting upcoming election from Quepem constituency. He inaugurated Citizens’ Welfare Centre at Khola, while assuring to continue with the social service he has been doing in the constituency.

D’Costa is a Congress leader, who is likely to take on Deputy Chief Minister Chandrakant Kavlekar, who is expected to contest on BJP ticket in the constituency. Kavlekar had won 2017 election Congress ticket and later switched over to BJP.

“I will be contesting election in Quepem constituency. Whether I win or lose my social work will continue,” he said.

D’Costa said that his social work is not aimed at garnering votes for the polls. “I am not saying that you vote for me because I have done social work. Whom to vote is your own choice,”he said.

The leader said that the people living at Khola are still fighting for basic amenities like electricity, toilet and road. He pointed out that seven houses in this area still don’t have electricity.

“I had taken up the matter with Power Minister NIlesh Cabral, who asked us to pay the required fee in the department after which the power could be connected. We have paid the fee and now department will install 42 polls which will provide electricity to these houses,” he said.

D’Costa said that a group of women from Khola area had come up with the complaint that they don’t have toilet. They have to go out in open for toilet. He said that he would be constructing toilet for that area, once locals give their NOC.

He said that looking at the municipal results, 65 per cent of the voters in municipal council jurisdiction of Quepem are against the MLA. He said that those people will vote against him.

He pointed out that during the municipal polls , congress-led panel won on four places, BJP on four and five where independents, who were lured by MLA Kavlekar.