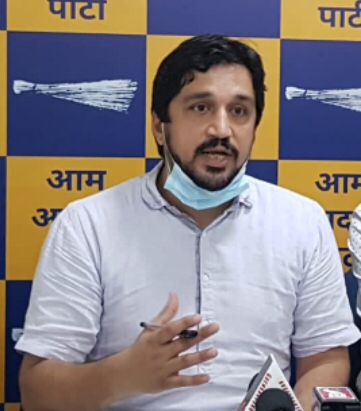 Slamming the Sawant Sarkar on Saturday the AAP asked him to stop wasting taxpayers money on what is essentially an Election campaign. The Sawant Sarkars Sarkar Tumchya Daari program has been nothing but a PR Jumla. Once again in the rush to copy the AAP Sawant has made a mess. Instead of reaching to the the doorstep of Goans Sawant is asking Goans to assemble again at a townhall. Moreover he is offering no solutions to Goenkars and only political bhashans for the cameras.
Goans have been waiting for services and are forced to line up for schemes for their documents and cant even get an Ambulance to their doorstep. This attempt of the Sawant sarkar to copy AAP while flattering is completely lacking in planning or intent. It is not enough to just announce a PR campaign the Sawant Sarkar need to work like Arvind Kejriwal for its citizens. AAP’s doorstep delivery scheme allows citizens to ask for services via a toll free number and have Mobil Sahahyaks turn up at their doorstep. Unlike this Sawant wants Goenkars to come to him! After lining up outside offices now they will line up to see their CM as if hes a king and they are his subjects?
The call to 1076 leads to a call centre who find out what it is that the Citizen wants.The call centre then sets up an appointment for the mobile Sahayak to vist their house, collect documents, fill up forms, scan details and provide a receipt. After this the service is provided to their doorstep. This is what is called real doorstep delivery of services. 99% of RTO work is done via doorstep delivery and has cut down heavily on Corruption.

“The Sawant Sarkar needs to first think before trying blindly copy AAP. The Pramod Sawant Govt should stop its PR campaign of calling Goenkars to one spot as if hes a big king and instead work for Goenkars” said AAP Goa Vice President Valmiki Naik “It is also about time he stopped wasting Goan taxes on his political campaigning” added Naik