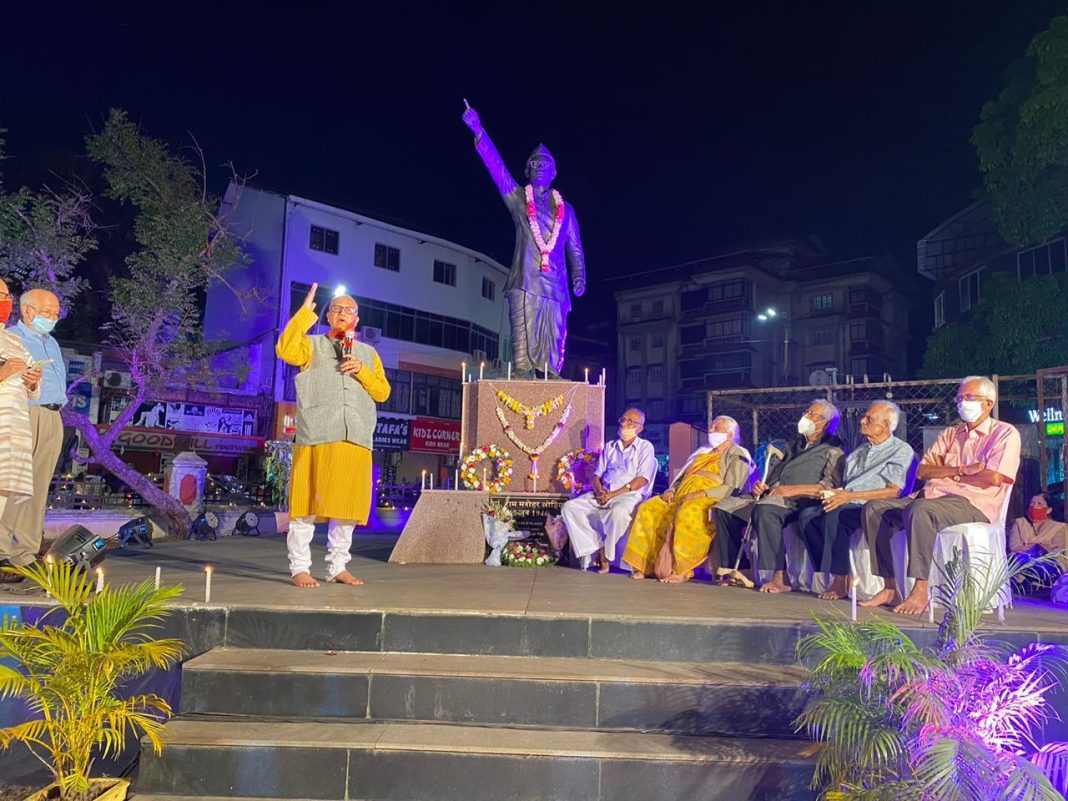 Margao – It is my fortune that today on this auspicious occasion of 60th Goa Liberation day, I get an opportunity to felicitate the five jewels who struggled hard, faced imprisonment and torture from the Portuguese regime. It is only and only because of the brave heart freedom fighters that our pristine Goa could get reunited with Mother India on 19th December 1961 stated Leader of Opposition Digamber Kamat.

It is unfortunate that the government completely ignored the heroes of the freedom struggle and did not find it important to invite them for the function attended by the Hon’ble President of India. I strongly condemn this act of the government whose focus is only on extravaganza spending Crores said Digamber Kamat.

He was speaking at the “Deepotsav” organised by the Citizens of Margao at the historic Lohia Maidan. Veteran freedom fighters Pandurang Kuncolienkar, Gajanan Raikar, Shashikala Hodarkar Almeida, Gopal Chitari and Vaman Prabhugaonkar were felicitated at the hands of Margao MLA Digamber Kamat and Thinker Datta Damodar Nayak.

Pandit Jawaharlal Nehru needs to be remembered for his immense contribution to Goa. Today, some sections are deliberaty trying to malign his image. Panditjis statue needs to be erected in Goa said Datta Damodar Nayak.

Today is one of the most memorable day in my life. I am feeling humbled to get felicitated at this historic place under the feet of Pioneer of Goa freedom struggle Dr. Ram Manohar Lohia. This honour is most prestigious for me when our Mother land Goa is entering its 60th year of Liberation stated freedom fighter Pandurang Kuncolienkar.

I along with my freedom fighter colleagues are feeling hurt with the approach adopted by the government of completely side-lining us from the function at Panjim today in the presence of President of India. I regret to state that this government has a different agenda and ulterior motives in organizing the said function, Pandurang Kuncolienkar said.

We fought bravely against the Salazar regime of the Portuguese. Some of our colleagues laid their lives in the Goa liberation struggle, but it is sad that today even the government does not find it important to invite us for the very function, which could take place because of the freedom fighters. I am extremely saddened to note that the chief minister remembered us yesterday late night, said freedom fighter and former MLA Gajanan Raikar.

It is the bounden duty of any government to preserve the historical monuments. Unfortunately, this very place where Dr. Ram Manohar Lohia lit the flame of Goa Liberation with his Revolution on 18th June 1946 is neglected by the government. I appeal to the government to immediately take up the renovation work of this Lohia Maidan stated freedom fighter Gopal Chitari.

The government needs to help the needy and prioritize on giving timely pensions to the freedom fighters, senior citizens and others who are dependent on the government support. I regret to mention here that when government is spending Crores of rupees on the function at Panjim, I along with other freedom fighters did not receive my pension for the last month said freedom fighter Shashikala Hodarkar Almeida.

Today my age is 83 years. I have only one wish of seeing this historic place renovated. I appeal to the government to ensure that the renovation work of this glorious Lohia Maidan is taken up on top most priority stated freedom fighter Vaman Prabhugaonkar.

The entire Lohia Maidan was lit with candles and tributes were paid to the Martyrs Memorial, Statue of Dr. Ram Manohar Lohia and the freedom fighters.

Earlier in the day, Leader of Opposition Digamber Kamat was the first to pay respects at Lohia Maidan where he offered floral tributes. Anil Pai compeered the function. Prominent citizens of Margao attended the function.