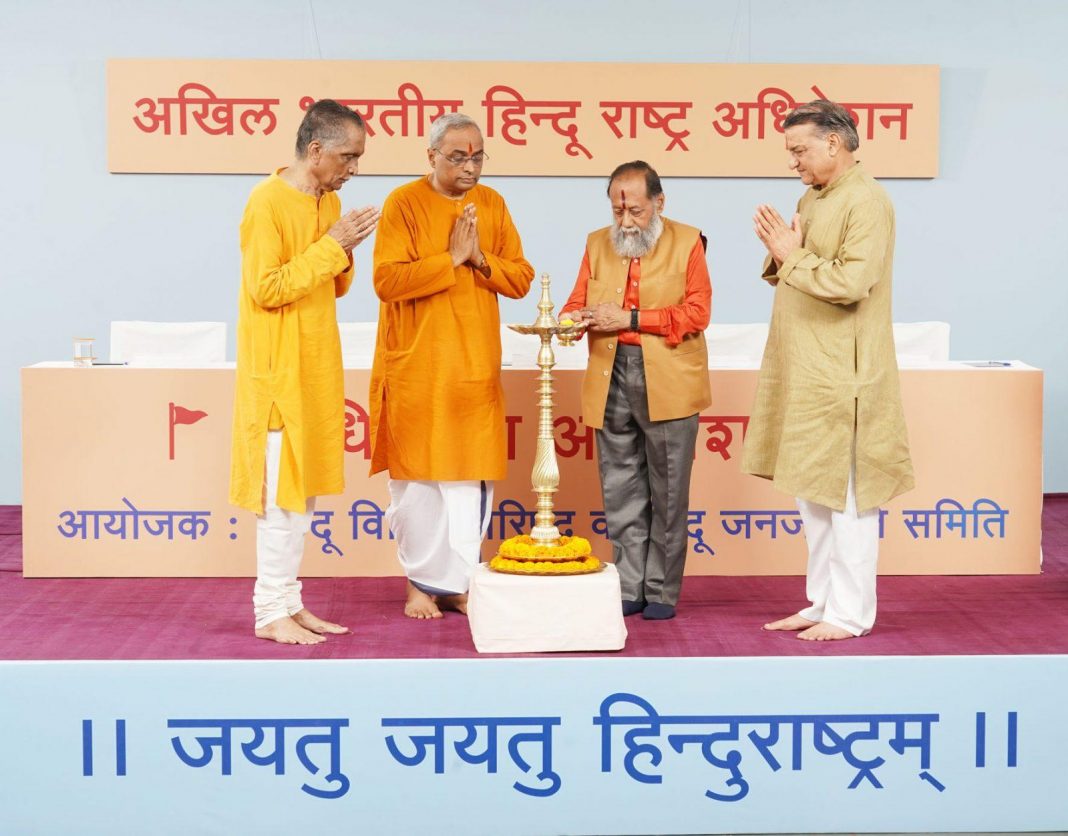 Ramnathi (Goa) – The Constitution of our country is said to be ‘secular; however, as per Article 370 of the Constitution, there is opposition to inserting the word ‘Secular’ in the Constitution of Jammu and Kashmir. As a result, a strange situation has arisen – our country is secular, but the State of Jammu and Kashmir is not secular. If everybody in India has been given freedom of expression, freedom of religion by the Constitution, how can the demand for the ‘Hindu Nation’ be unconstitutional ? In comparison, action of Mrs. Indira Gandhi in 1976 that of inserting the words ‘Secular’ and ‘Socialist’ in the Constitution vide the 42nd Amendment is unconstitutional especially when Emergency was declared and leaders of opposition parties were put behind bars. The powers of the judiciary and media were also restricted during this time. Contrary to this, the concept of ‘Hindu Nation’ is ancient and encompasses the universe and considers the welfare of the whole world. Swami Vivekanand had said, “The soul of development lies in Dharma”. Therefore, Bharat today needs development based on Dharma and not just material development, said Shri. Ramesh Shinde, National Spokesperson, Hindu Janajagruti Samiti, at the inaugural session of 2-day ‘National Advocates’ Convention’ on 27th May at Shri Vidyadhiraj Meeting Hall of Shri Ramnath Temple. A resolution to protest the arrest of Adv. Sanjiv Punalekar, who fights for Hindutva within the framework of Constitution and is National Secretary of Hindu Vidhidnya Parishad, was unanimously passed in the Convention.

Senior Advocate Hari Shankar Jain said, “Today, the word ‘Secular’ is being used only to appease minorities. People have got fed up of secularism. The BJP govt which got elected due to Hindu votes should take decisions in the interest of Hindus. Hindu advocates should say with pride that they are working for the interests of Hindutva.”

The coordinator of Hindu Vidhidnya Parishad, Adv. Nilesh Sangolkar, gave guidance regarding, ‘Advocates should contribute in the mission of establishing the ‘Hindu Nation’ actively’. Adv. Vijay Shekhar from Bengaluru guided on ‘Judicial fight while working against corrupt judges’.

The Convention commenced with the blowing of conch. The priests from Sanatan Purohit Pathashala recited Veda mantras after auspicious lamp was lit. The Founder Member of Hindu Vidhidnya Parishad Adv. Suresh Kulkarni read the message given for the Convention by Paratpar Guru (Dr.) Jayant Athavale, Source of Inspiration for Hindu Janajagruti Samiti. Shri. Sumit Sagvekar of Hindu Janajagruti Samiti conducted the proceedings.

Previous articleNorth District Magistrate prohibits digging of road for 60 days; prior permission must
Next articleThree arrested for poaching wild boar at Rivona