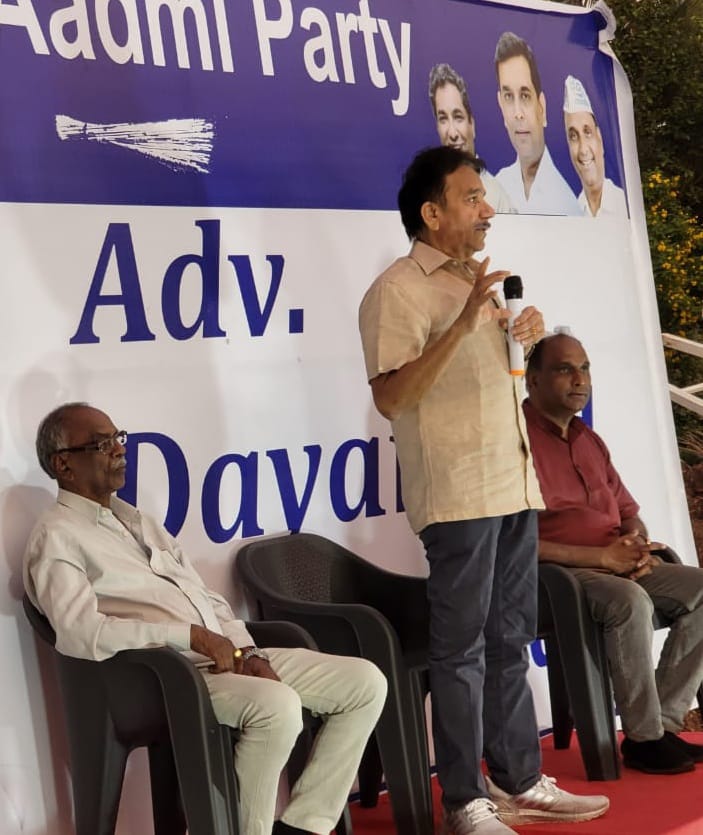 Aam Aadmi Party Campaign Committee Chairman Adv. Dayanand Narvekar addressed a corner meeting in the villages of Carona and Goljuem in the Aldona Constituency on Monday.

While addressing the gathering Narvekar said, “Goa gained freedom from Portuguese in 196. After 60 years of liberation, Goans continue to demand good roads, uninterrupted power, and safe water supplies.The government has failed to provide the basic facilities to the people”.

Adding he said, “The Delhi government, on the other hand, has provided uninterrupted power and water supply, good health and education facilities within six years of its rule”.

“The recent job scam clearly shows that talent and marks are not important in Goa any longer. Getting a government job is not easy as it seems. It requires bribery or having a kinship or friendship with a minister. It may change, if all Goans come together and vote for an honest party like AAP”, he said.

He further said, “We will ensure that only the deserving people will get jobs in the state government. The current practice of recruiting people in government through favours from MLAs or influential politicians will be discarded. The entire system of job recruitment in the government sector would be made transparent and accountable”.

He said, “The Sawant government had been sleeping for five years but when Kejriwal promised employment guarantees to Goans, they woke up and dangled the 10,000 jobs carrot before elections and failed to provide it”.

“Unlike the Sawant government, Kejriwal never makes fake promises. If AAP is voted to power, we will ensure that 80% of jobs, including in the private sector, will be reserved for local people. Apart from this a Skills University will be set up in Goa on the lines of Delhi where youth would be skilled and made employment-ready. We will also bring legislation prioritising jobs for the people dependent on mining in the mining industry once it resumes”, he added.

Previous articleSix more omicron cases detected in Goa on Tuesday , toll rises to eleven
Next articleRG lashes out at Pandurang Madkaikar over illegalities in Cumbharjua