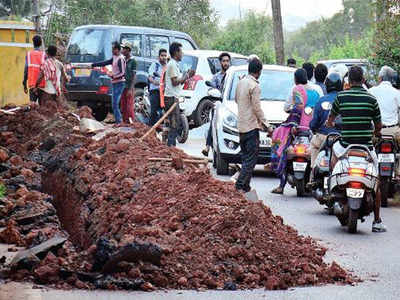 Adv. Aires Rodrigues has today sought the intervention of the North Goa Collector over the precarious state of  the roads in Ribandar.

Drawing the attention of the Collector that the Imagine Panaji Smart City Development Limited (IPSCDL) has over the last four weeks recklessly dug the roads in Ribandar endangering the lives and property of the residents of the area, Adv. Rodrigues in his letter to the Collector has pointed out that in terms of the permission for digging issued the roads were to be restored to its original condition by 15th of May.

Stating that in rank violation of the condition imposed the roads of Ribandar continue in a very precarious state, Adv. Rodrigues has also stated that that entire stretch of Ribandar is very densely populated and there is heavy traffic in the area with the roads being very narrow.

Pointing out that huge dug up trenches have been left open all over, Adv. Rodrigues in his letter has further stated that there is also a lot of debris lying along the roads posing a health and traffic hazard.

Adv. Rodrigues has urged the Collector to depute a senior   officer to immediately inspect the roads in Ribandar so that he could report on the very grave factual position.

Adv. Rodrigues has also demanded that stringent action be taken against   Imagine Panaji Smart City Development Limited (IPSCDL)  and the contractor for gross dereliction of duty and for very high-handedly endangering the health and lives of the residents of Ribandar and the commuting public.

Previous article8th ‘All India Convention for the Hindu Nation’ from 27th  May in Goa !
Next articleRape survivor in Babush Monserrate case traced in North Goa