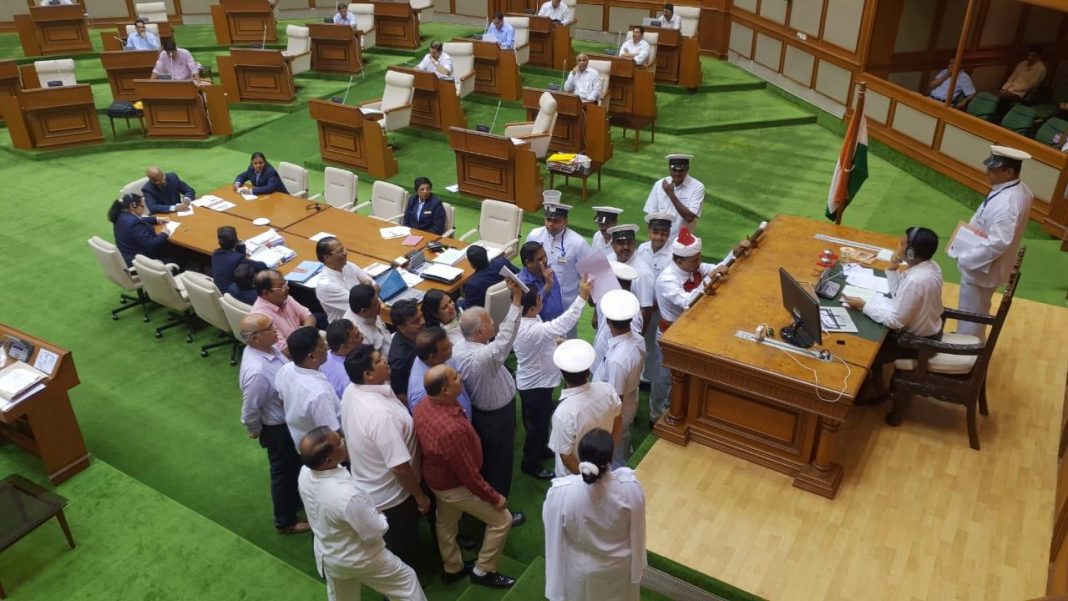 Porvorim: For two days, Congress stalled Goa Legislative Assembly over formalin in fish issue. But when the issue was actually discussed, the opposition benches had no words to support their action of two days.

Chief Minister Manohar Parrikar today told the State Legislative Assembly that the current impasse of formalin in fish is showing its impact on tourism.

He was answering to the Calling Attention motion moved by BJP legislator Nilesh Cabral and Congress MLA Aleixo Reginaldo Lourenco expressing fear and anxiety in the mind of people after formalin was allegedly found in the fish which was imported and sold in the State.

The Congress has been stalling the proceedings of the House since Thursday over the issue of formalin in fish, and their protests even continued today pressing for the Adjournment motion on the issue.

The chief minister said that after the ban on import of the fish which was imposed by the State, the fish prices have soared. Parrikar read out list of fish that is sold in Goa and their market prices as on today.

Responding to the demand on ban on export of fish from Goa, the Chief minister said all the fish that is harvested in the State is not consumed locally. “There are several varieties of fish that are netted off Goa coast but are not consumed by the locals. They are exported outside the State,” he said.

Parrikar said that total  30,000-40,000 tonnes of fish which is locally harvested or brought in from the neighbouring states is exported from Mormugao Port Trust.

The Chief minister said that banning import or export of fish will not provide solution for the polluted fish. “Let us not get bad name on this issue, we are getting bad name on many other matters,” he said.

“Fish being the staple food of the Goans and the issue on hand has a direct bearing on the health of Goans, I would urge upon all the members of the House to refrain from politicizing the issue and request all of them to support the Government on the action taken and propersed to be taken for addressing the issue,” he said.

Parrikar said that the government having utmost concern for the health of the people and to remove the fear and confusion that has been created in the minds of Goans, has imposed a ban on the storage, distribution or sale of fresh fish including crustaceans brought from outside the State for consumption  in the State for a period of 15 days from July 18.

“Since the enforcement of the ban, the police in association with transport department had prevented the entry of nine trucks of fish brought from outside the state at the border check post. The Government is ready to consider extending this ban for a further period in the interest of the health of the Goans if the prevailing circumstances warrant the same,” he said.

The chief minister said that even as and when the ban is lifted, to build confidence amongst the Goans regarding the quality of fish available in the market and to ensure the quality of fish sold in the maket, the FDA along with the Directorate of Fisheries and Police assistance shall continue to monitor the quality of fish by carrying out the routine and periodic inspections at the major markets of Margao, Panaji and Mapusa.