BJP for Jindal and Adani and not for Goa or Goans: AAP 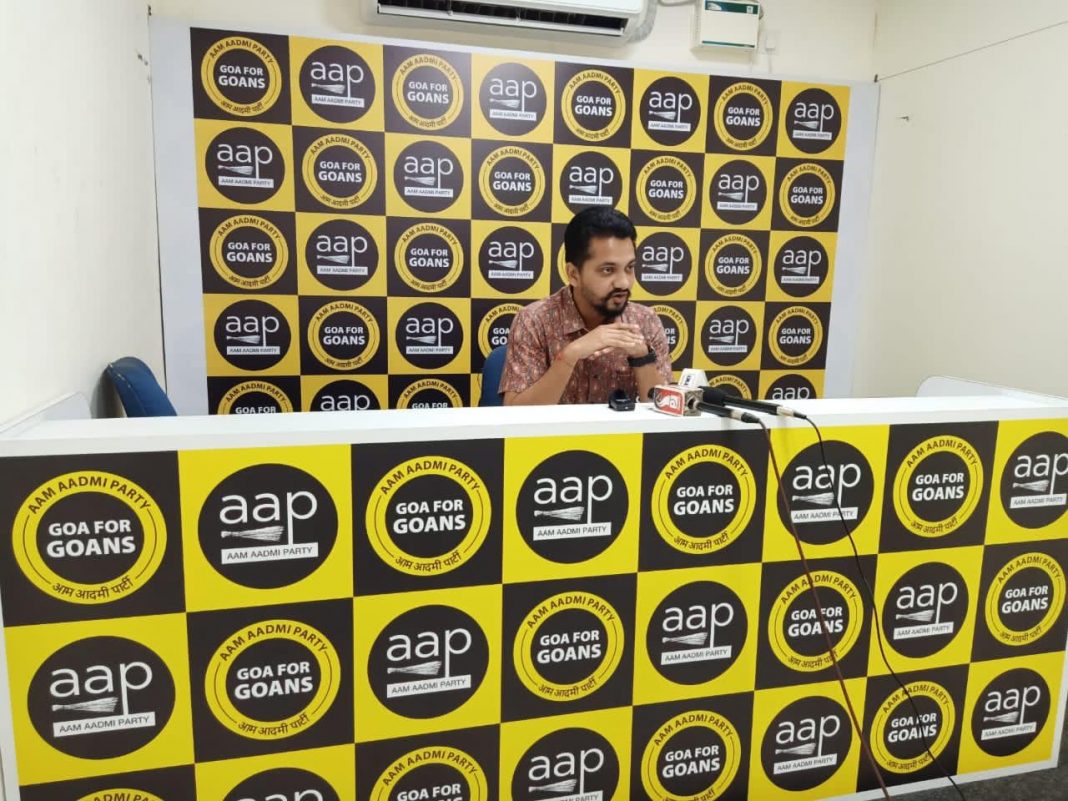 Panaji: Aam Aadmi Party (AAP) takes a jibe at the government taking strong exception to the stage two sanction granted to Goa Tamnar Transmission Project Ltd., to convert 69.41 hectares of forest land to lay a high power transmission line from Xeldem to Mapusa even as there are protests taking place every day over conversion of forest land in Wild Life Sanctuary on the border of Goa with Karnataka.
AAP spokespersons Adv Surel Tilve  pointed out that the stage two sanction granted by Ministry of Environment and Forests  is based on a report submitted by the Goa Forest Department on November 5, 2020 wherein it stated that the project proponents have complied with all the conditions laid down in the stage one approval that was granted on April 29, 2020.
Adv Surel pointed out that it is surprising that the Ministry of Environment and Forests has given the stage 2 sanction despite there being a Supreme Court order of 2015 banning any conversion of forest land in an area of more than 1 hectare and with a canopy density of 10. “The land sought to be converted now is more than 69 hectares which is way above the area banned by the Supreme Court,” he said.
He pointed out that in the reserved forest area Tamnar Transmission Project Ltd has cut more than 2,670 trees in an area of nearly 10 hectares and which was having a canopy density of 80.
“This is not only a violation of the law but even going against the orders of the Supreme Court,” he said and wondered how the BJP government is tolerate this total lack of respect for the laws of the land.
Surel pointed out that the Stage 2 sanction is based on the State Forest Department report which has not said anything about the compensatory aforestation to be undertaken by the project proponent. “In fact they are asked to provide evidence of having planted double the trees they have cut within two years of receiving the sanction,” they said.
“Everybody knows that trees do not grow in two years and while mature trees that have been living for decades have been cut how can those be replaced in two years?” they asked and pointed out that in all probability the proponents may just do a plantation to show the forest department and the plants will die thereafter.
He also pointed out that nearly 40 scientists from Karnataka and Goa had written to the Minister of Environment and Forests cautioning against the three projects that are seeing very strong objection namely the double tracking of railway line, widening of road and transmission line through forest land.
The scientists pointed out that these projects are inter state projects involving two states and therefore demanded that a cumulative environment assessment study be undertaken instead of adopting the normal practice of taking piece meal approvals for projects.
He had pointed out that these projects would adversely affect the habitat connectivity of tigers and elephants besides also damaging the rich biodiversity of the area and pointed out that why and how Tamnar Transmission purchased 10 hectares of forest land ought to be investigated.
Adv Surel accused the BJP government of bypassing the laws of the land only to help their friends like Adani and Jindal for whose benefit the three projects are being pushed at breakneck speed with the chief minister Dr Pramod Sawant seeking time by making false statements to fool the people.
“It is indeed ludicrous that the chief minister says that thousands of trees which will be cut from our Goan forests will be compensated for by planting trees in Karnataka.” He said
“When there is evidence of former chief minister the late Manohar Parrikar objecting to the double tracking of the railway line because it was meant to transport coal it is now very surprising that Dr Pramod Sawant is stating that Parrikar never objected to the double tracking,” he pointed out.
“It is indeed ludicrous that the chief minister says that thousands of trees which will be cut from our Goan forests will be compensated for by planting trees in Karnataka.”
Surel  said this is another lie from the present chief minister who knows that Parrikar is no longer alive and hence cannot divulge the truth. “However there are statements made by him which were published then that tell the truth and expose the lies resorted to by the present chief minister,” he said.
- Advertisement -

Previous articleRTI reveals that 25 are in race for coveted post of CSIC while 32 are eyeing that position as SIC
Next article60th Liberation Day be celebrated by helping the needy with 100 Cr Economic Revival Package: Congress