The Aam Aadmi Party inaugurated a new office in Cuncolim on Saturday. The party has been receiving a tremendous response in the constituency.

The party has been aggressively campaigning in Cuncolim under AAP’s Cuncolim assembly incharge Prashant Naik. Prashant Naik, AAP’s Cuncolim assembly incharge said, “Cuncolim has played a major role in Goa Liberation movement. Cuncolkars have always been at forefront in all revolutions including Goa Liberation and keeping Goa’s separate identity during the merger issue. Late Shabu Desai, a freedom fighter and torch bearer of the anti-mergerist during Opinion Poll played an important role in making some of the Goans to change their mind. Let’s start from Cuncolim to bring the Aam Aadmi Party to power by taking revolutionary decision like Desai”. 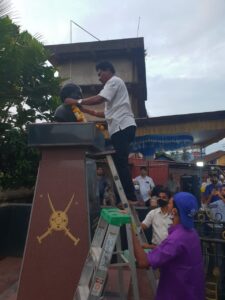 “The new office will be open from morning 10 am to 1pm and then 3 pm to 6 pm in the evening. Residents will now easily be able to reach out to the party leadership via this office. People can come to the office anytime if they need help for official work to avail government schemes. Even panch members can seek assistance from AAP. People from Cuncolim constituency can approach the office and do their registration for job guarantee programme, electricity guarantee programme, free pilgrimage programme and other guarantee programmes of AAP that will be declared in the future. AAP members are always ready to help everyone”, Naik said.

“Goenkars are already impressed by the Kejriwal model of electricity, school and healthcare amongst other things. Many youth in Cuncolim showed interest Rs 3000 support that AAP has promised to the family of unemployed youth. Another concept that has fired up residents is the setting up of the Skill University as this would allow Goenkars to compete better for jobs and increase their employability. AAP is receiving tremendous support from the Cuncolim residents compared to 2017 elections. We have received huge response for the AAP’s rojgar yatra and AAP Chief Arvind Kejriwal’s free electricity guarantee”, said AAP Goa convenor Rahul Mhambre.