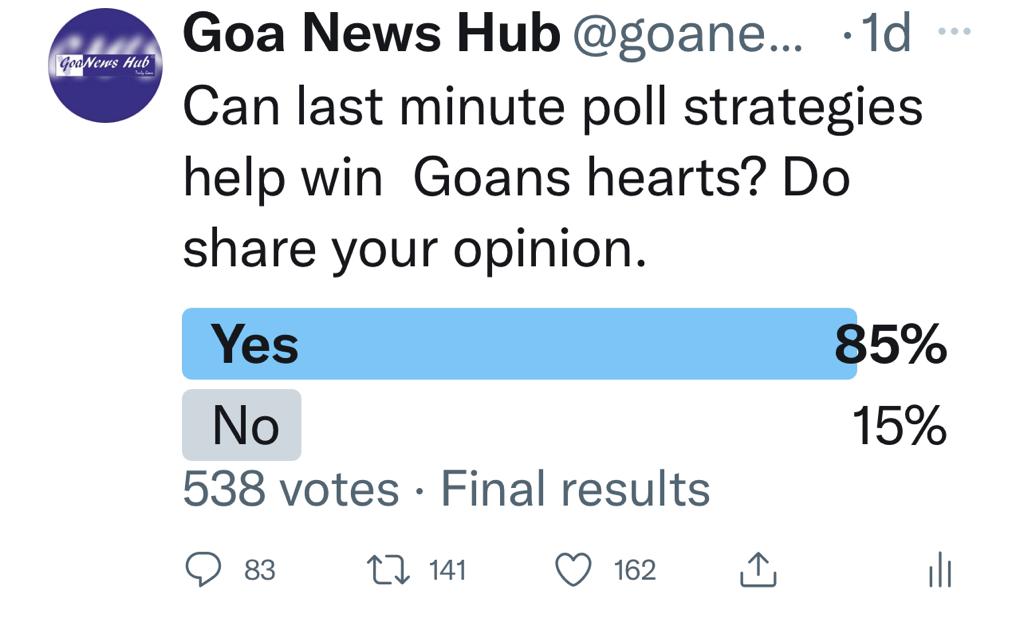 Panaji: A poll launched by our website on Twitter  asking people whether last minute poll strategies can work to win the election in Goa has shown alarming results.

The poll was launched to know the pulse of the people at the backdrop of several non-Goan political parties trying to make its in-roads in the coastal state and win upcoming election.

While the poll may not represent the actual sentiments of the people, it certainly reflects the opinion of those who follow our Twitter account. Total 538 people voted in the poll that began on Thursday evening and culminated on Friday after being active for 24 hours.

85 per cent feel that last minute strategies can work wonders

As per the responses on the twitter, 85 per cent of the participants felt that the last minute poll strategies could help win Goans’ hearts. The 15 per cent responded in negative.

Total of 162 people liked our poll, 83 commented and 141 had retweeted about it.

Strategies versus ground work in Goa

While the political outfits which are traditionally existing in the state have been harping on their past records, the new entrants in the state including AAP and much novice TMC are banking on the future promises.

TMC is yet to open up its mind but AAP has created ripples in the state with its ‘guarantees.’ Delhi Chief Minister Arvind Kejriwal has launched two sets of guarantees which are surrounding electricity and employment.